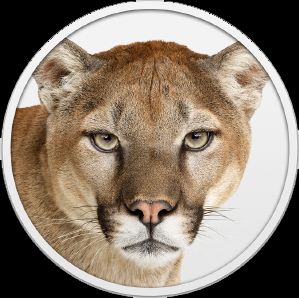 Today, just after the Q3 financial results presentation, Apple has officially launched Mac OS X 10.8, nicknamed Mountain Lion, and here it is, the hands on.

Differently from my other reviews I will do this one starting with installation and following the exact order and categories in the official Apple's feature list.

If you want to create one yourself, be it a USB flash disk or a DVD, you can follow the instructions I put for Lion, as they work the same (just use Mountain Lion installer), or use an automated application for that hassle, Lion Diskmaker from Guillaume Gète.

It is to be noted that any of the ways to install (be it directly from the Installer, the USB flash disk, the DVD…) Mountain Lion is able to update without problems systems with Mac OS X 10.6 "Snow Leopard" and Mac OS X 10.7 "Lion" conversing your preferences, applications, etc.

If you have any previous version, you will need to go to a physical Apple Store or to a friend's house and buy it (using your account, don't do piracy please), and then burn to USB or DVD. I have not tested this scenario so I don't know what happens with previous system versions when updating. You can, however, copy all of your files to another hard disk (I suggest you using Carbon Copy Cloner for that task) and then import that with the Migration Assistant that will be launched when installation is finished. This way guarantees your settings and files are conserved.

While Lion already left out 32-bit only (anything below a Core 2 Duo processor) Macs, Mountain Lion drops out any mac that needs 32-bit kernel extensions, leaving the list of supported Macs as follows:

It is important to note that if you're trying to buy Mountain Lion from the Mac App Store and you receive a "product is not available" and/or "Error 100" message, just wait a couple of minutes and retry, that is happening because of the intense number of users trying to buy it at the same time. And when you get it finally, the download speed will be surely slow. Things will get faster as time passes.

The accessibility feature gets overhauled moved to a categorized and easier to access preference panel, made accessible anywhere using Option-F5 shortcut and adding support for 14 new braille devices. 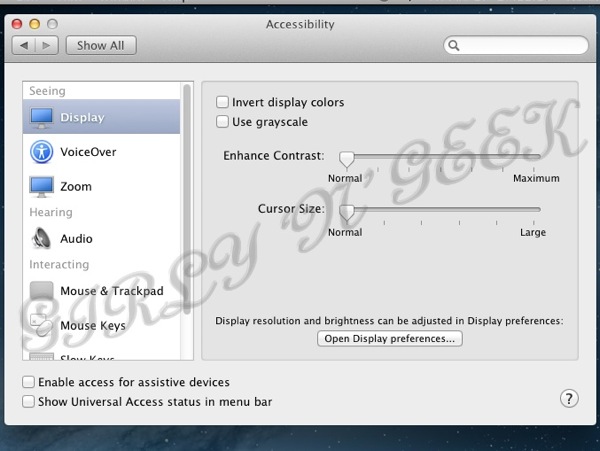 This is pretty useful for presentations, allowing people to connect an ATV to a presenter and just use any Mac to put the Keynote slideshow, a QuickTime movie, or show a game! Just click the AirPlay icon on the menubar, choose which ATV of all found you want to use, and let's go.

Or you can go to the Sound preference panel and get the sound output to be your ATV.

Your Mac automatically downscales the resolution to 1080p (or you can choose it to be your Mac resolution so no scale happens) and encrypts the data so it cannot be intercepted on the network.

Enhancing the revision system included in Lion, you can now rename a file from the title bar.

You also get keyboard shortcuts for duplicate, and the save as option make a return for all of us that missed it.

Also you can move a document to iCloud, and any unsaved (aka "Untitled") document is automatically saved on iCloud just in case. 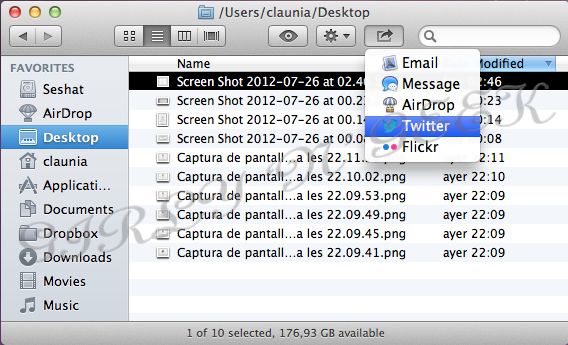 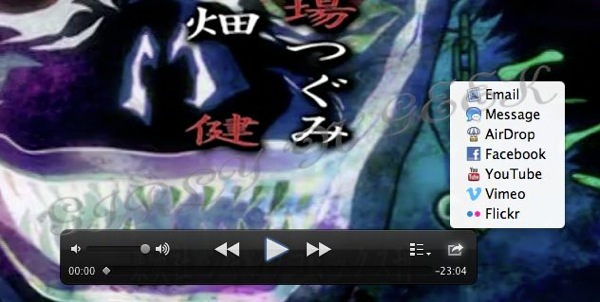 Calendar gets a new sidebar listing all of your calendars, offers search suggestions, gets a new date picker and moves the notifications from the old centered alert message to the Notification Center.

Groups are moved to a new column, repeated contacts from different services (Yahoo!, Twitter, Gmail, iCloud, etc) get automatically joined and shown in an unified view, and you can share contacts in vCard via e-mail, iMessage and AirDrop. 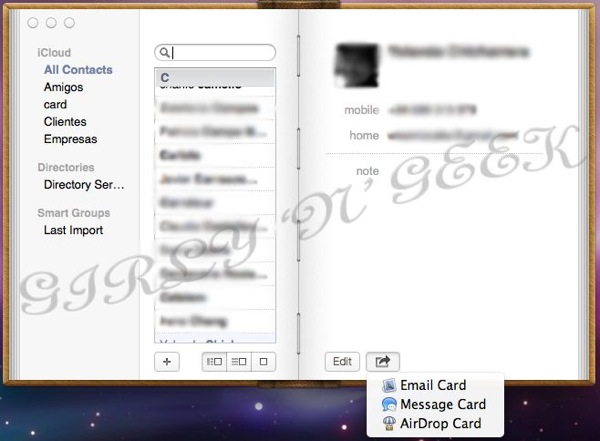 Now when you go to add a new widget, the widget lists is full screen, similar to Launchpad, includes a search field and supports the creation of folders. 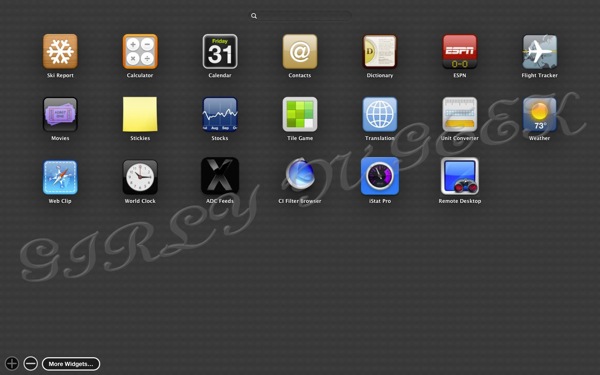 From the worlds of iOS, half a Siri has become. 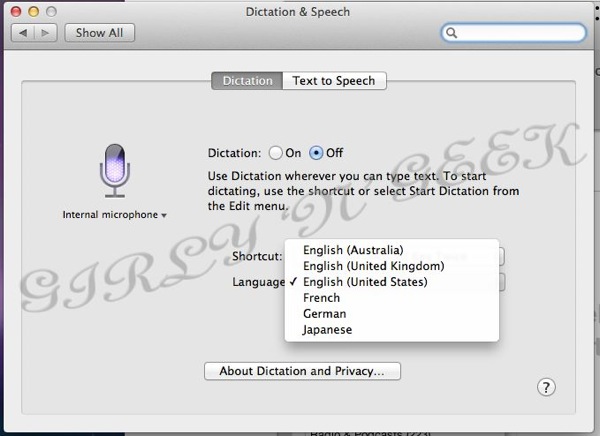 Using the same voice recognition engine introduced with Siri for the iPhone 4S, now you can dictate anything on your Mac. For now, only English (AU, UK and US), French, German and Japanese are supported. And the same way as in Siri, your voice is transmitted over internet to Apple datacenters for recognition, something illogical considering that Macs are perfectly capable of running the recognition by themselves. 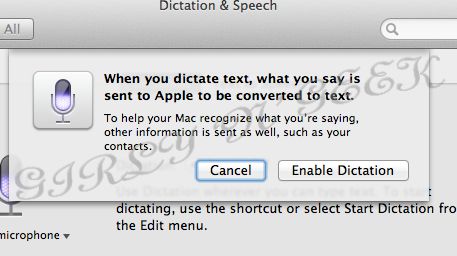 It supports basic commands like "all caps" and "new line", and autolearns. But unlike Siri, it does not give you any information or search but simply writing in text boxes (also, unlike Siri, any application's text box is supported). 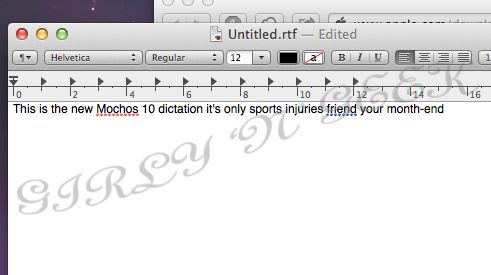 And that's supposed to be "This is the new Mac OS X dictation, it only supports English, French, German and Japanese".

The real issue is that until all the sentence is dictated, sent, processed and incorrectly converted to text, you cannot see the failures, making you lose so much time correcting it that in some situations (or until Si… I mean, Dictation learns your exact accent). 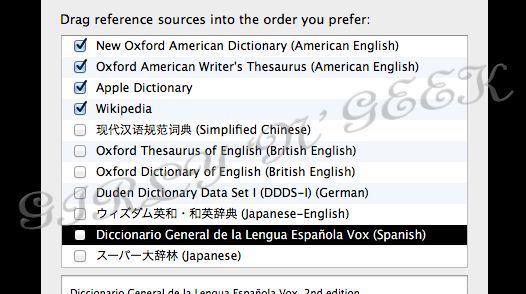 Dunno about German or Chinese, but for Spanish using the Vox's dictionary instead of the Royal Academy (RAE) one does not give the official language definitions.

In fall, Mac OS X 10.8 will add system-wide support for Facebook, including posting to the wall, reading your wall on Notification Center, sharing and syncing Facebook contacts on Contacts. 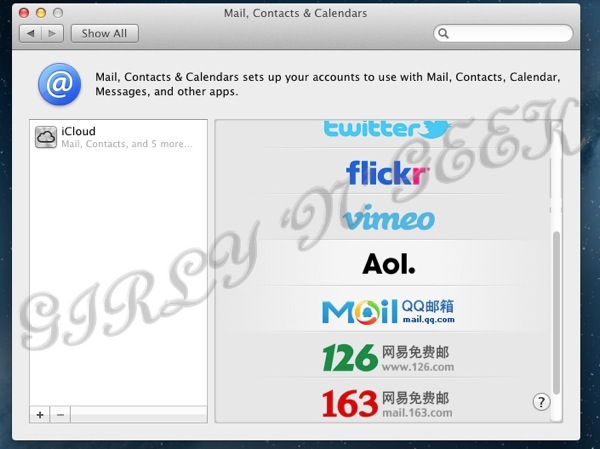 Apple is currently having a huge grow on the chinese market, and Mountain Lion includes a great list of improvements for it. However most of them only show when you're using the system in chinese, or setting your location as China.

Among them, there is a improved text input for Simplified and Traditional Chinese, dynamic word lists that update automatically from internet, fuzzy Pinyin input, autocorrection, better handwriting recognition, automatic saving of your Pinyin user dictionary on iCloud, Emoji and facemarks, support for the Sina Weibo microblogging service system-wide, as well as for the Youku and Tudou video sites, Baidu search in Safari, support for QQ Mail, 126 and 163 mail services and new and improved fonts.

Finder includes a couple of small but appreciable changes. Apart from the previously mentioned sharing, the most useful new feature is that when you're doing a copy a progress bar appears in the destination folder as well as a small cancel icon.

Now you can also encrypt any volume using Finder, just double click it and choose encrypt (that is, FileVault 2 is no longer restrained to the boot volume), without the need to use Disk Utility or Terminal.

A small novelty is that you can open Quick Look not just pressing space, but also tapping on the trackpad with three fingers. 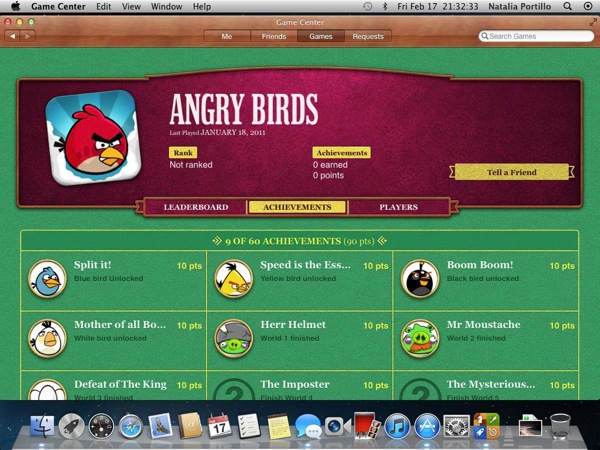 Game Center comes to the Mac, with all the features from iOS. It also supports cross-platform (iOS-MacOS) games, both for just achievements and leaderboards as well as for multiplayer gaming.

Something not included in iOS' Game Center is in-voice chat. 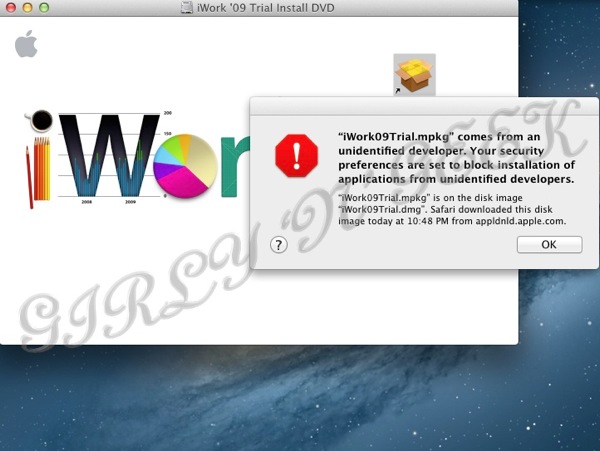 Probably, the most controversial feature from Mountain Lion. Gatekeeper is a protection that allows the system administrator to choose which applications can be installed and run. 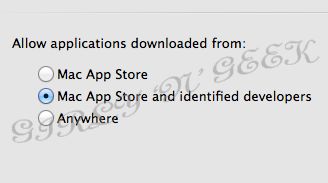 In the case you're an administrator, pressing the Option key while you open/install it asks you for a confirmation in case the application does not fall under the current setting. 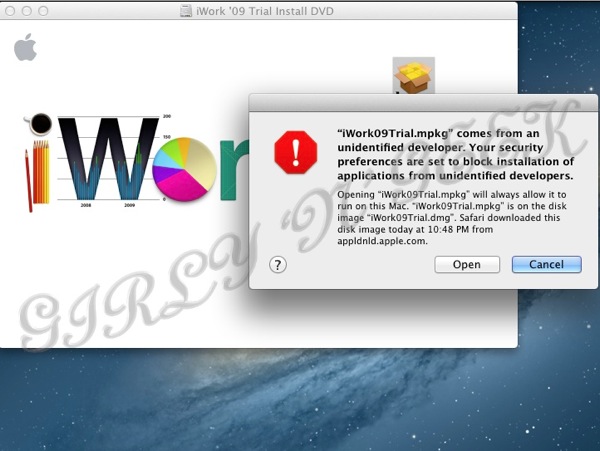 Personally, I see this as a good move, because it lets administrators the same power as before, while moving users to a safe default that helps preventing malicious software from spreading easily.