First of all, what is “infrared camera modification”?

It is the process by what a camera is modified to permanently be unable to take visible light photography.

Then, how will it take photographies at all?

Almost all digital cameras use a device called CCD or a device called CMOS (sensor) to convert the light to electronic signals so the camera can create a image. These devices are very sensible to infrared light and so, the camera manufacturers must put a filter that prevents it to reaching the sensor. The modification consists on changing this anti-infrared filter to an infrared-only filter.

The light is a kind of energy, Its color derive from a characteristic of energies called “wavelength”. It’s indeed, the same energy as the radio and TV signals we receive with antennas. What the human eye can see is called “the visible light”, between red and blue-violet, both inclusive. The infrared light is that light with a wavelength higher than the red light, and is invisible to the human eye.

Not a lot of things do, at least not in enough power to be visible to digital camera sensors.
TV remote controls, use infrared light to communicate with the television set, but this light is small and directional, useless for a photo.

Light bulbs (normal ones) generate almost no infrared light, having only a little emission exactly in the borders of the heated metal.

Fluorescent tubes generate enough infrared light to appear very luminous when directly photographed, but this light dies soon, and is a poor and useless infrared light source for scenes.

Halogen bulbs generate a lot of infrared light (including the invisible-to-cameras far infrared, also called commonly “heat”) and are the ideal artificial source for infrared light, being able to almost compete with the next source.

The Sun. While we tend to think the Sun makes things visible it also irradiates a lot of infrared light (and ultraviolet). It’s the ultimate source of light for infrared being able to excite digital camera sensors even when an anti-infrared filter is put on.


Can I take infrared photographies without losing the ability to take normal ones?

Yes you can. There are three methods for it:

1.- You can take an infrared-only filter and put it on front of the camera. This filter will allow only infrared light to pass it, but most cameras will require long exposure times and any camera that uses any method other than the sensor itself to automatically focus will be unable to do it (almost all reflex cameras)

2.- You can modify a camera to remove the anti-infrared filter but without putting a infrared-only one instead. This will allow you to take both kind of photos (normal and infrared ones). But, in the source of an infrared light (like sunlight), without an anti-infrared filter photos will appear strange, being an hybrid of normal-infrared, and most possible, with heavily saturated reds.

3.- You can search for a camera with a night mode (professional-grade videocameras include this mode along with an infrared torch) or a Sony camera with “NightShot” function. This, however, is difficult, because while you can modify any old or secondhand camera, the cameras that include this mode are difficult to find and expensive.


What is the Sony “NightShot” function?

It’s a function included in some Sony compact digital cameras that temporally remove the anti-infrared filter from the sensor and in someones even lights up an infrared light source. It is not present in all models, and most of them disable it under sunlight.

So, after this glossary, I start the modification of my old camera, my Epson PhotoPC 650. 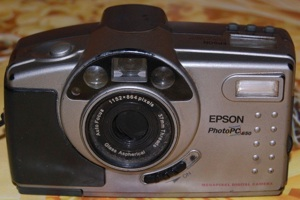 First of all I opened the camera, taking apart the back cover to see the main PCB covered by what appears to be an EMI shield along with a ground connector, as it’s soldered to the PCB to ground. 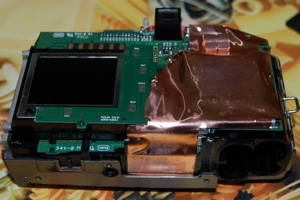 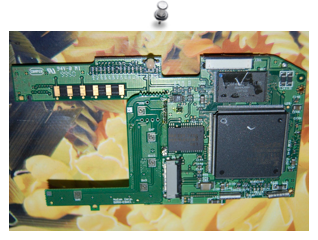 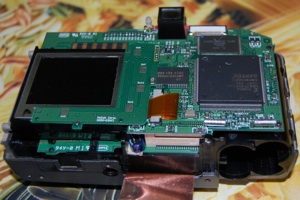 Removing this PCB gives us the view to the rest of the chips on it. Surprising to me, the CPU on this camera is a Fujitsu SPARCLite. While I’ve heard that there were attempts to use SPARC CPUs on embedded devices, I never imagined seeing one on a digital camera.

The exact model is MB86831 corresponding to a 66 or 80Mhz 32-bit SPARC architecture processor with 2Kbyte of data cache and 4Kbyte of instruction cache. It integrates a FPM and EDO DRAM controller, an interrupt controller and a bus controller. It does not include a clock generator neither a FPU. 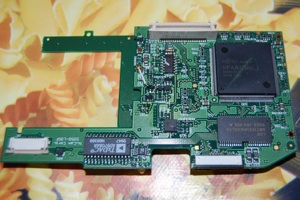 The next PCB just under it is the sensor PCB. While I’m unable to visually distinguish CCD against CMOS sensors I can assume it’s a CCD sensor because the chip just below it is a Sharp IR3Y38M 10-bit CCD controller.

In top of the sensor, that stack of glasses contain the anti-infrared filter, the reddish one.

And this is were my bad day started.

I tried to remove the anti-infrared filter from the rest of glasses. Useless, they are heavily glued. So I though “let take this out all”. 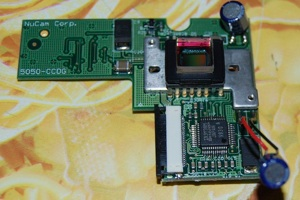 So I put a hand-made infrared-only filter. This is made with blacked color negative film because the film is transparent to infrared. And I mounted, and closed the camera (bad idea).

It did not work, the CCD showed a full bright all-white image, even without any kind of light.

Something in that stack of glasses is needed for the CCD sensor to work.

So I had to reopen the whole camera, and put again the glass stack, without my handmade filter to check if I broken the camera. Luckily, I did not.

So, without the glass stack it does not work, I then put my handmade filter with the glass stack.
It blocked all visible light then but... It unfocus the image, bad thing... 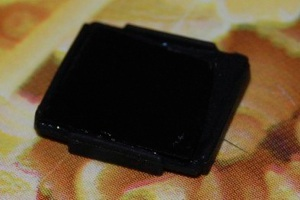 Too tired to reopen it to remove my filter, I let the time pass, and then remembered, I have two webcams that I never (and never will) use.

So I took the oldest one, a Creative Webcam Pro 3, and opened it. Badly, there is no anti-infrared filter.

It seems that the whole lenses (made of plastic) works as that.

I closed it and took the newest one a Microsoft LifeCam 3000 Pro VX (not a cheap one, costed me 70€). I opened it and found the heaven.

There is an infrared filter, a tiny single glass between the lenses and the sensor. I took it off and put my handmade filter and... VOILÀ!!! It worked.

While this is a very expensive and bad camera (I bought it because my work required to create a program compatible with that SPECIFIC webcam, what a waste of money and time finding it). It only supports 1280x960 pixels photos, and they are very noisy. That plus my handmade filter seems to have fingerprints of scratches that make focusing difficult does taking professional photos a bad idea.

However, for fun, I can take photos and videos :D.
So, what is the final result? 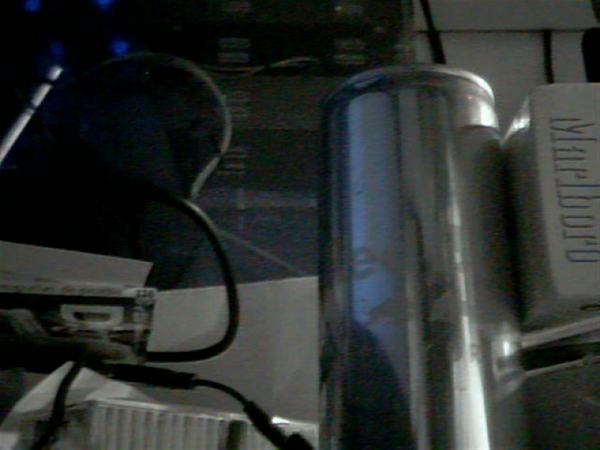 This is what I got.

This scene is illuminated with a halogen bulb 50cm at the right of the rightmost part of the image.
Most tints are invisible to infrared, that’s why the Marlboro box that is red to our eyes appear totally white here, as well as the Red Bull can that includes blue, red and yellow tints over the silver aluminium appears with a different silver toning and a light red tint.

The tints used on press, as can be seen on the leftmost magazine (DigitalCamera), are however, visible to infrared.

In the upper part of the image there is a diagonal ultraviolet fluorescent tube, that as can be seen, emits enough infrared light to show its silhouette and nothing more. 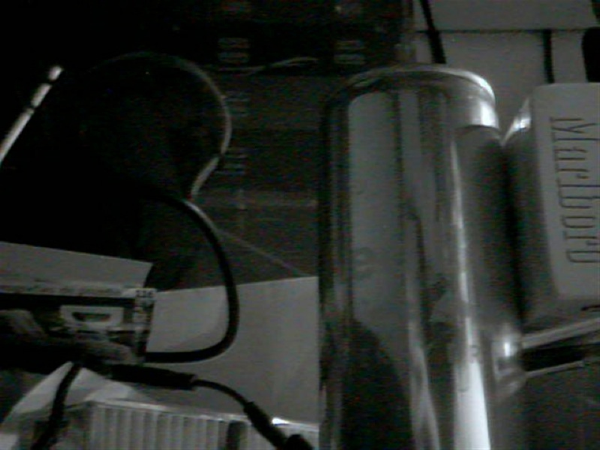 This is the same scene but this time a professional 760nm infrared filter is placed on front of the camera.

The image is the same but all the color is lost, specially the blueish light on the Red Bull can, that was created by the residual ultraviolet light from the fluorescent.

Color in infrared photographies is false, including black and white. The colors is a brain interpretation of what our eyes see. As our eyes are unable to see infrared light, there should be no color, no photography at all.

However the sensors are formed by a couple of primary color (red, green, blue) filtered microeyes (photodiodes) that are then mixed in a color image. How much of the infrared light penetrates that color filters define what colors will the camera computer put in the photography. 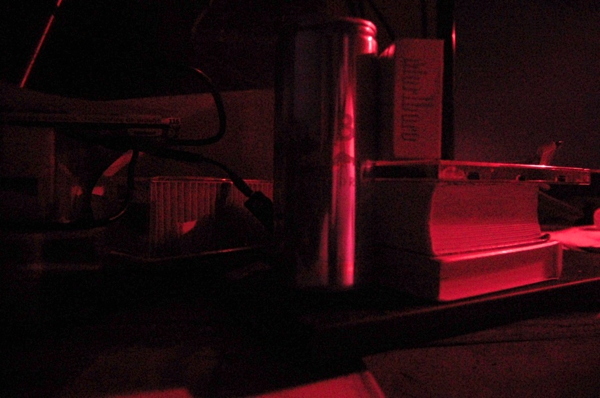 This is with an unmodified Nikon D40 (that is, with the anti-infrared filter on top of the sensor) and the 760nm filter on front of the lenses.

The scene is the same, with the same illumination. The exposure time was lot longer (a second and a half against less than half a second on the modified webcam) and the image is more unfocused (it’s impossible to focus this camera for infrared light. You will see no image at all on the viewfinder and the autofocus system does not use the sensor for focusing, and does not work).

Opening it is also no piece of cake, being a carefully measured piece of engineering. It’s not recommended for non-experts.

Under direct sunlight (no clouds), exposure times are the same as normal photos, but focus still does not work. When I get my next professional camera I will buy a filter and made the modification, but until that, I will get a second hand 30€ or so camera as soon as possible for modifying it.
This camera blue and green color filters prevent almost all infrared light to pass out with this filter (with 850nm filter, the blue one allows some more infrared light to pass, making the photo violet instead of red), so the image processor thinks the image is red, and gives it this tone. 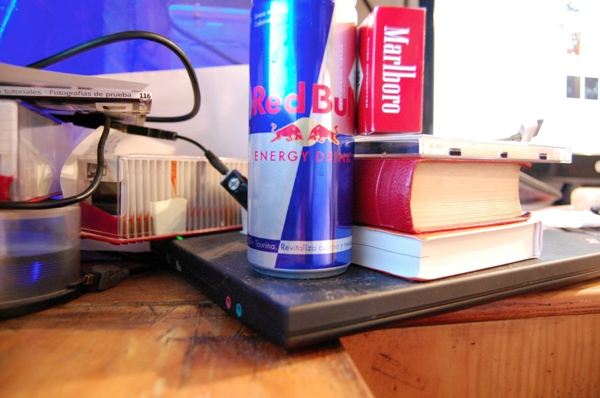 And this, is the visible light, normal, photography.

You can see the heavily difference in colors. The Marlboro box is red, not white. The Red Bull can contains varied colors, and even the aluminum, untinted, shows a different tone of silver.

Below of the Marlboro box is a CD jewel case that shows same colors on infrared and a French<->Spanish dictionary with yellowed pages and red cover, that appears as full white on infrared.

Stay tuned to my Youtube channel and my photo gallery as tomorrow I will put some sunlight photos and videos, and as soon as I buy the secondhand camera I will update with the modification and results.

And I will also restore my beloved Epson PhotoPC 650 camera to it’s original state, as it deserves so, after letting me take tens of thousands of good photos.
Posted by Unknown at 7:40 PM No comments: Links to this post