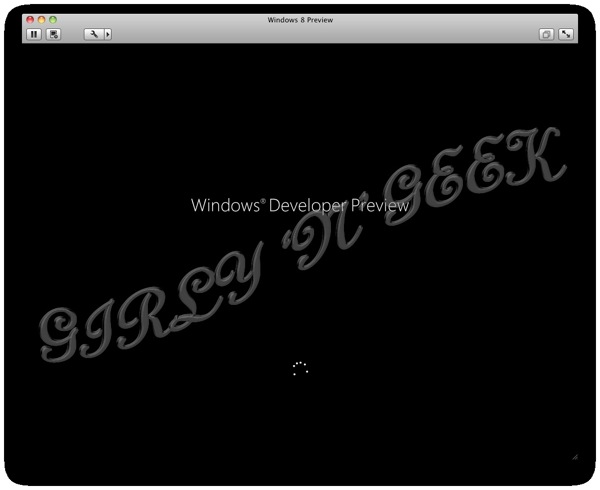 Coinciding with the celebration of the //BUILD/Windows conference, Microsoft has released a public developer preview of their next generation operating system, codenamed "Windows 8".

This developer preview comes with a bundle of new applications, the preview of a new Visual Studio, and in two flavors, user and server, for x86 and x86-64 (amd64, em64t, x64, choose your alias).

Because, in Microsoft words, Windows is reimagined. It now pretends to be an operating system able to run from the smallest little thing in our desktops (winds say "wPad"), to our biggest twelve-core gaming rigs with 60" plasma screens.

Redactor's note: I installed it in VMWare Fusion 4 first (crashes on VMWare Fusion 3) and then do a reinstallation in real hardware. It should be able to update Windows 7 but I have not tested that yet. 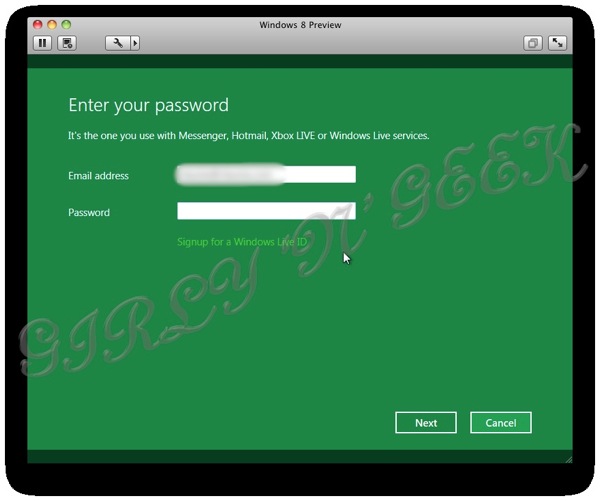 Installation is pretty much the same as Windows 7, few choices, no headaches, and it's faster than 7's.

Things differ on the pre-usage questions. Now you can choice to answer nothing, or to be asked of everything.

If you choose the second, questions are the typical, how do you want to have updates installed? Is this a secure or public network?

Then the funny start, creating a user, or not. Now you can use your Windows Live ID for login (or create a separate user that then you can link to a Windows Live ID). If you do so, your password for login is the same, and your settings get synced between all of your machines that use that Live ID. 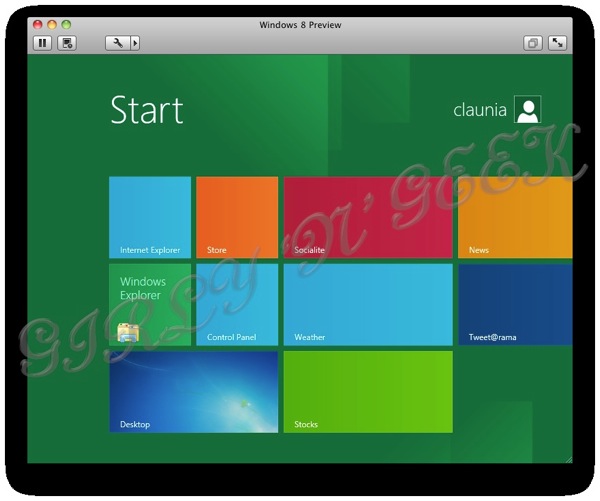 And so this is. "Start menu" dies and becomes "Start screen", filled with tiles.

If you have a Windows Phone, this will sound not just similar, but identical. It's the same UI used there, and here it's called Metro.

And you'll miss a touch-screen or multitouch device, because, Metro is horizontally aligned, and using a mouse scroll does nothing, so you have to manually move a scroll bar to the right to see what's hidden. 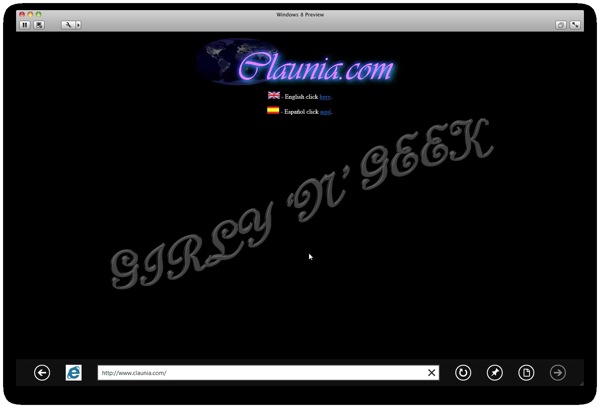 One of the first Metro apps you can see is Internet Explorer 10, with a simplified "goes to the point" interface.

Navigation is moved to the down, with a back button, a "site button", the address bar, refresh button, pin button (that will create a tile to directly access this webpage from Metro), favourite button and forward button.

No mess, this is all, nothing more. Flash is not included, and rumors say it won't never be.

A new feature is that the site button is able to detect if a site belongs to an application you have installed.

For example, the //BUILD/Windows conference webpage recognizes you have a BUILD application installed and allows you to launch it directly just clicking the "site button". 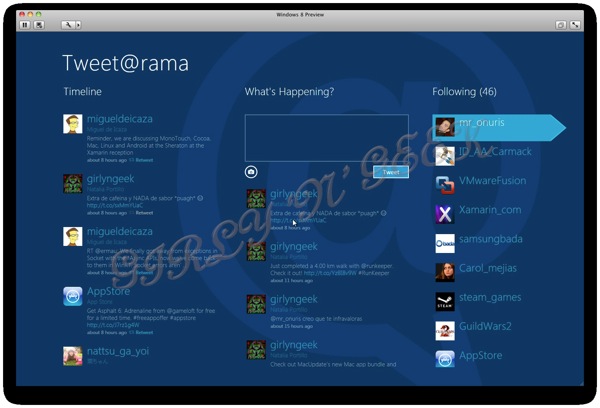 This new applications is just a Twitter client, nothing more.

At first start it will present you with the Twitter webpage to authorize an external application, and then you have your timeline, your posts, the people you're following and your followers at a glance.

Simple to use, gets to the point, and lovely to use. 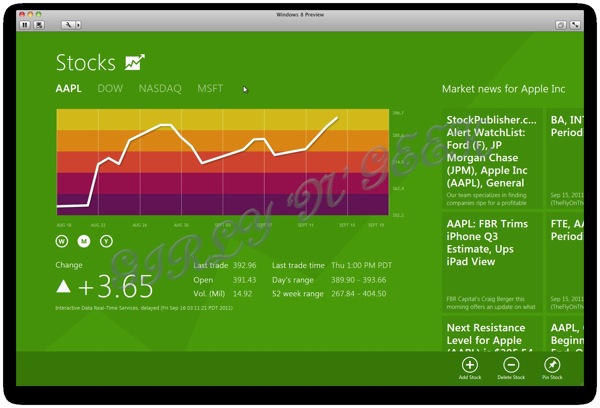 Simply what it says, shows you the stocks you want, with a detailed view, market news and graphs. 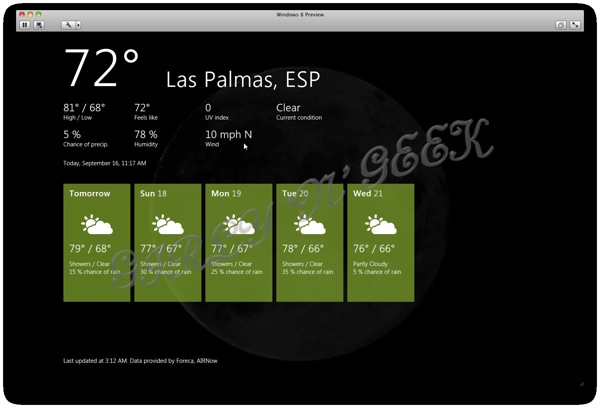 This tile shows you a weather forecast of the city you choose, in Farenheit.

This is a beta and they have forgotten all the people in the world that uses Celsius scale, there is no option, nowhere, to change it.

By default the city it shows is Anaheim, CA, the city where //BUILD/Windows conference is done.

You can choose it to detect your current city. 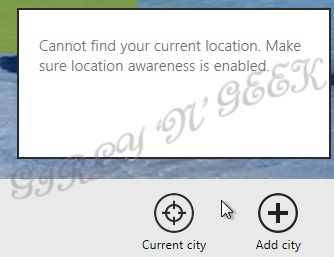 And then it will fail. Because location is disabled by default. I enabled it but it was unable to find my city even then, so I had to manually input it. 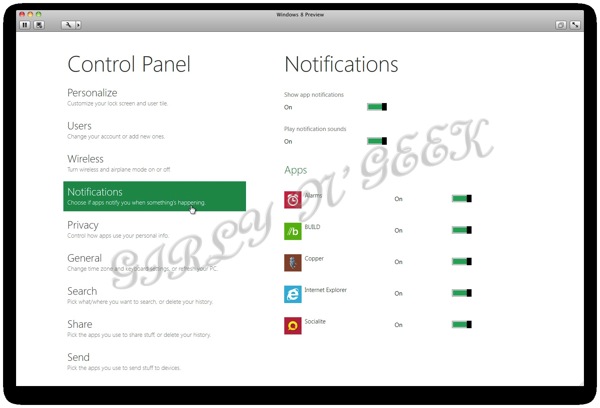 There is a new Metro-based control panel with things in a manner that remembers me of the iPad control panel. Probably the Windows Phone one is similar (I have yet to test a device, donations welcome).

Things are sortered by category, with enable-disable toggle buttons.

This things affect all Windows, not just Metro things, but are mostly Metro oriented.

You have the option to go to the old-and-good Control Panel from here with just a click, sorry, touch.

If you see the screenshot you'll see that I captured the Notifications panel. Yes, because, now, applications can send notifications while suspended or closed, so if you receive a message on Facebook, it will show up. 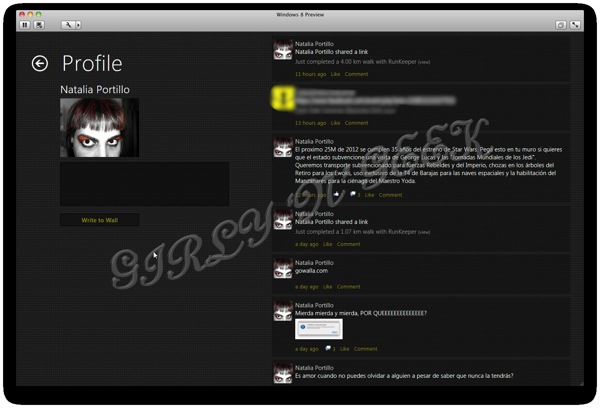 Included also between the Metro apps is Socialite, a Facebook application. 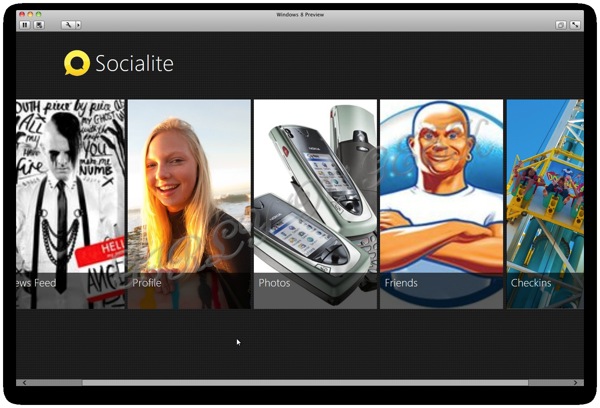 At a glance you can see your wall, your profile, your photo albums, your friends (and their things) and the checkins.

Indeed I love it quite more than the real Facebook page. 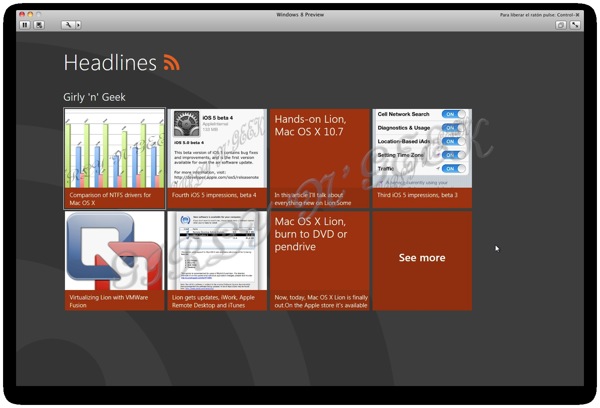 News is a feeds reader. By default it comes with a lot of feeds categorized, or you can add your own.

I added this blog, however... 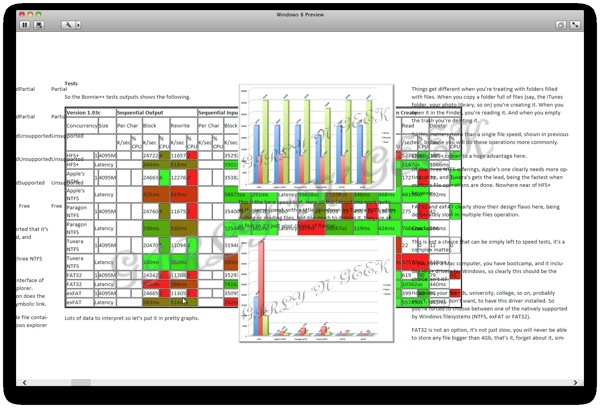 There are some failures in the rendering (ugh!), but remember, this is a beta, shit happens. 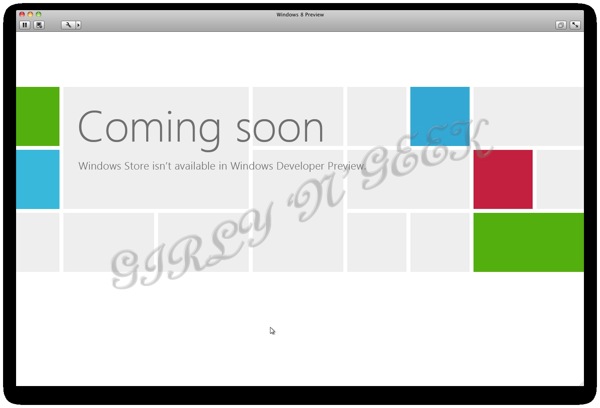 It is simply a place where developers can put their applications so they are sold in a centralized site, all the payment shit handled by Microsoft (that will gain a percentage).

Metro applications cannot be installed other way, so you're forced to use Windows Store. 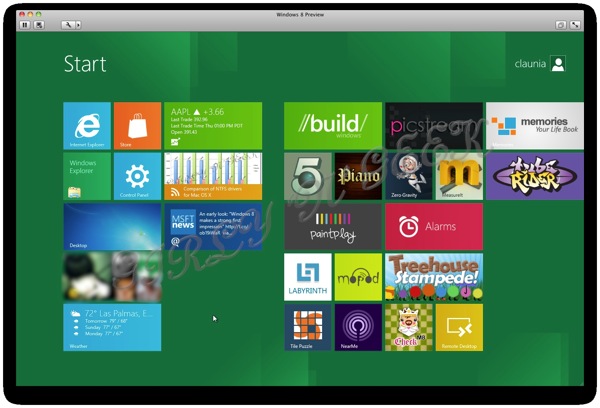 Now that I have setup my twitter and facebook account, that I've chosen my favourite blog and that I selected my city and some stocks, Metro is alive!

Yes, every tile gets updated live, even if their corresponding applications are closed.

Socialite shows photos of my facebook friends, News shows random articles from this blog, Stocks shows how Apple keeps growing, and Weather says me I'm at 72ºF (I don't know if this is heat or cold).

And, by some reason I don't understand, Tweet@rama is showing things I'm not following.

This is, along with notifications, one of the things taken from smartphones world to desktop with metro. The same as Windows Phone tiles update live with the newest information, does Metro. 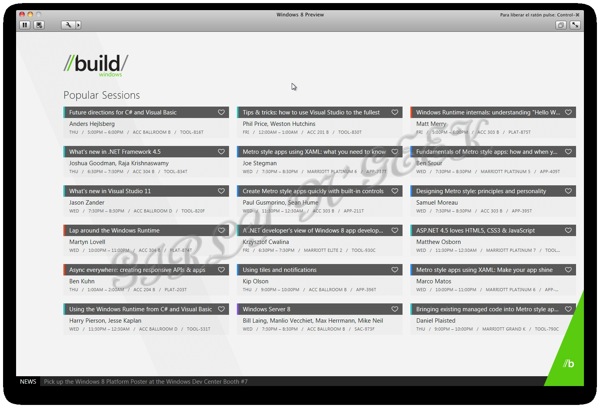 So that were the most important Metro applications bundled with this developer preview.

There are a bunch of other ones but I'll mostly do a small resume and some screenshots.

5 in a row is a Metro based Go game 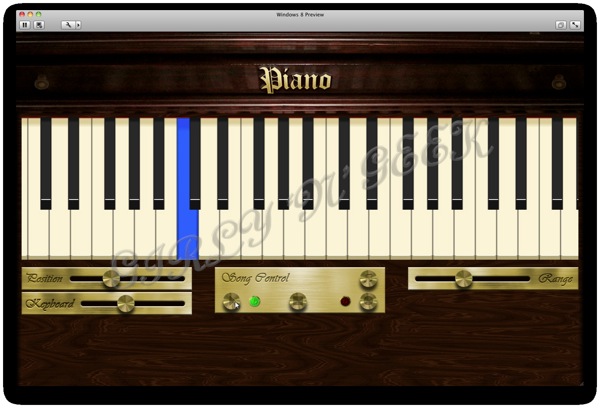 Piano is a touch-oriented piano. While you can play it with a mouse you can see me playing it here and check by yourself is not easy to do. 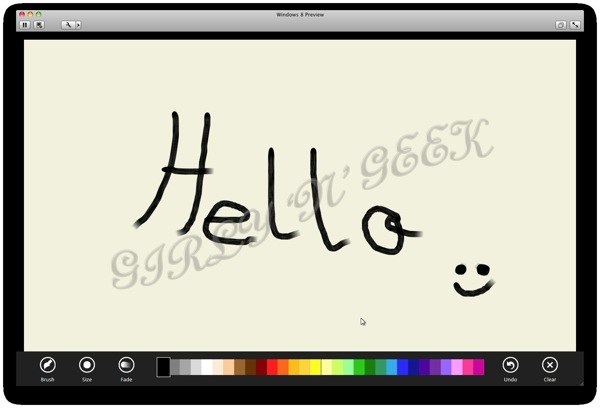 Paintplay is a touch oriented paint program with not much options. Funny for kids, useless for anything else. 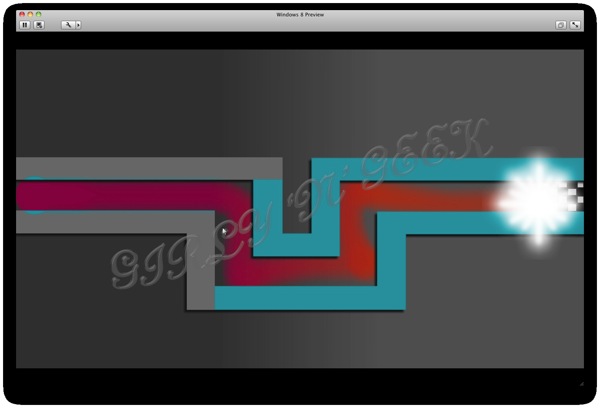 Labyrinth is what the name says, a labyrinth game, nothing more. 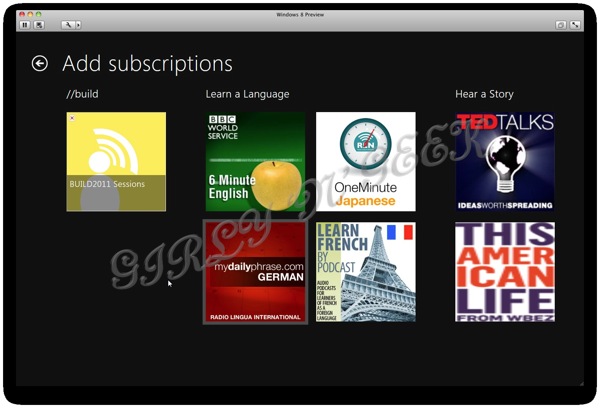 Mopod is a podcast browser and player. However there seems to be no way to add podcasts not included in the default directory. 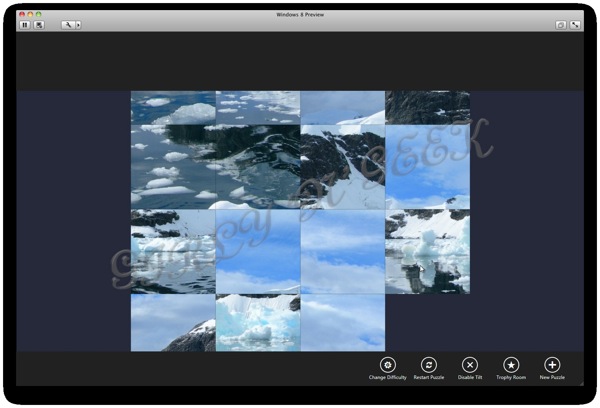 Tile puzzle must I say more?

Picstream shows a stream of photos from Flickr chosen by popular tags. You cannot login in your account, you cannot browse, you cannot choose any tag (only ones shown randomly between the most popular ones), quite useless. 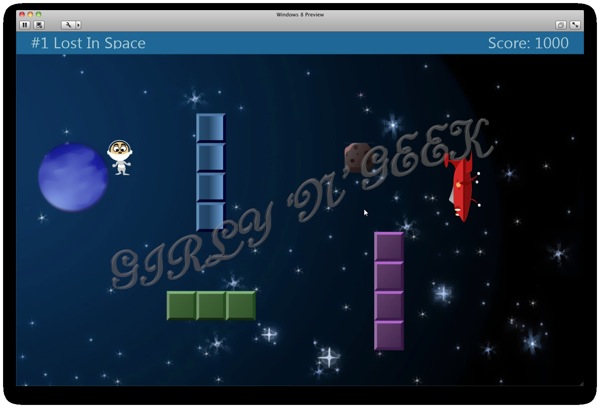 Zero Gravity is a simple game where you have to get the astronaut to his ship. 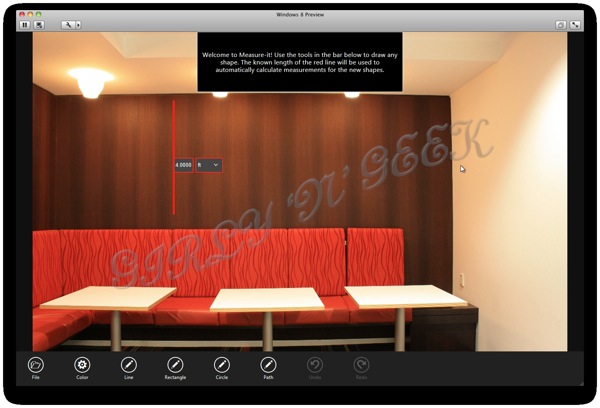 MeasureIt is... ok, 24 hours later I'm still trying to figure what the hell is it for. Alarms are just that, alarms, so your Windows 8 "device" can wake you up. 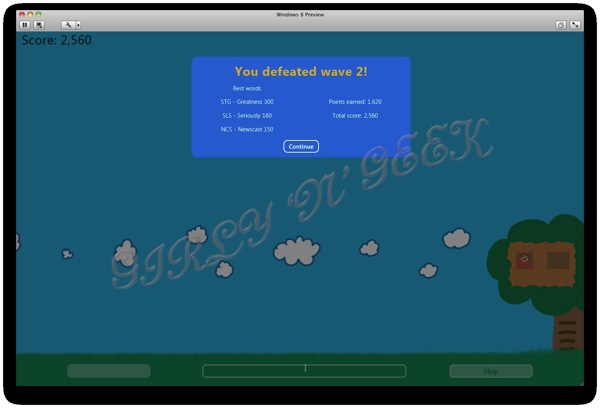 Treehouse Stampede! is a word game. It gives you three letters and you must form a word with all of them to launch a ball to the enemies so you kill them before they arrive the tree. Yeah the graphics seem done by a kid. 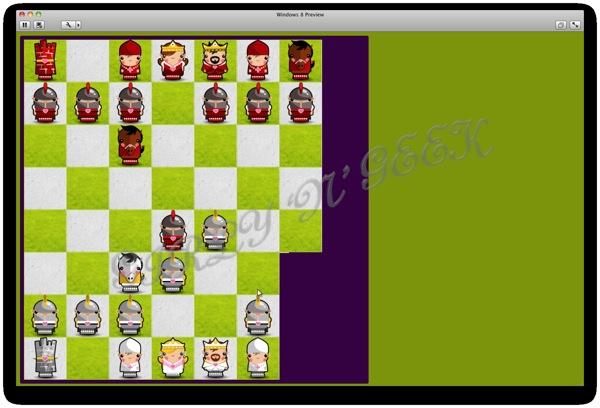 CheckM8 is a simple chess games, with graphics glitches that made it unplayable.

Memories Your Life Book is an application that allow you to create digital photo albums with any photos you have on your computer and then show them in slideshows to your friends, family, so on.

Tube Rider is a game where you have to construct a tube using pieces to arrive the goal in time.

Word Hunt is a game where you must form words of 3 or more letters using adjacent pieces.

Notespace is an application where you can create post-it, handwritten, using keyboard, or capturing a photo/video from an integrated camera.

Flash cards is a simple game for little kids that shows a question and a list of possible answers.

Ink pad is a notepad with handwritting recognition.

Sudoku talks for itself.

Copper is the classic movement puzzle where you have to move block to access the goal with a limited number of movements.

Air Craft shows you how to make a paper aircraft.

Bit Box mixes up different sound files you have on your computer to create that composition that will make you famous (or not).

First of all the most important thing missing is the Start Menu. It's nowhere, don't search it like crazy because you won't find it.

So where have all the things not Metro-enable gone? Good question.

While Windows 8 still comes with things like Microsoft Paint, Wordpad, Windows Mail, Windows Media Player, they are not accesible unless you go to their location with Explorer.

And what will happen with applications that I install myself and are not Metro enabled? You can create a shortcut on Metro, but it will not appear there by default, so, again, manually going to where it is installed.

The only two new confirmed things that were not present in my previously analyzed Windows 8 Milestones is "Windows To Go", that allows you to create a bootable USB disk with Windows 8 and your configuration, and the inclusion of .NET Framework 4.5.

So, this is all, from an user perspective.

If you are a developer, visit //BUILD/Windows conference webpage and start checking the talks. There are a lot of new things to do with applications, Metro, and all of that.

Personally I don't dislike Metro, but I think that it's a huge change from what users expect from Windows. It needs polishing, it needs a way to access the old and good Start Menu applications, and it needs more native applications.

Windows has been reimagined, and if it is for the good or for the bad, time will say.

Posted by Unknown at 10:55 PM No comments: Links to this post