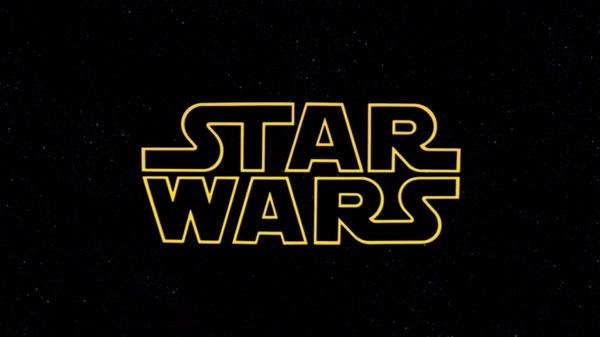 A long time ago in a computer not so far, far away...

(ta tatadaaaaa yeah it's the music)

From 25th August 2011 to 29th August 2011, me and a huge number of people, got invited to test the new videogame based on the Star Wars franchise. Presented by BioWare, Electronics Arts and Lucasarts, Star Wars The Old Republic is coming to our shelves.

This new videogame, presented officially and vaguely on 2007, and scheduled to launch on 20th December 2011, sets us approximately 3640 years before the Battle of Yavin (for those not so informed, the Episode IV movie ends with the Battle of Yavin) and is a Massively-Multiplayer Online Role-Playing Game (in the same sense as World of Warcraft, Aion, etc).

So let's analyze it, but please note this is a beta, so things are subject to change anytime. 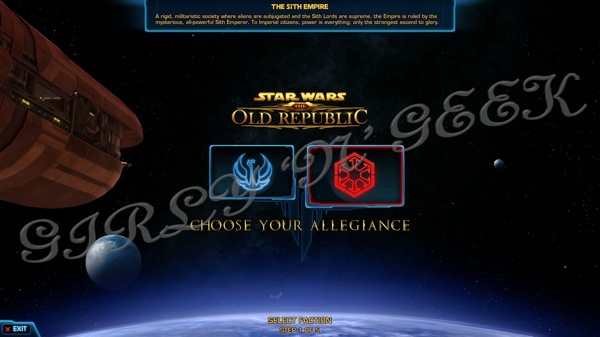 The galaxy is divided in two factions: The Republic and the Sith Empire. Each one has about half of the galaxy and sustain in a difficult peace, not so different from the Cold War, with skirmishes and warlike conflicts on their borders. And this is the first selection you can make.

Your allegiance chosen, should you choose a root class. This is quite inverse the usual, because, some races cannot access some classes.

So set up on a simple to understand table things go as following:

Depending if you have chosen a force-sensitive class (Jedi or Sith) or a one that's not, you start on a different planet, for a total of four starting planets.

Also on level 10 each class gets specialized in two classes, making a total of 16 playable classes.

A lot to choice from, but meditate on it you should, my young padawan.

About character personalization there are not a lot of choices, and all we hope that BioWare enhances this in time to release.

Finally, in common with other Star Wars games, sometimes you have to choose from the good act, getting Light Side points, or the evil one, getting Dark Side points. 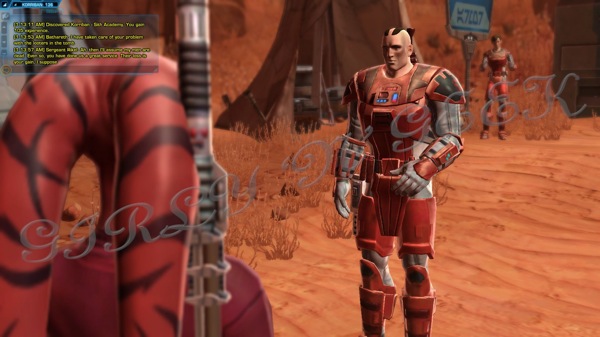 After you have chosen your root class and your race and your character is created, you'll see the first and not last cinematic.

Contrary to traditionals MMORPGs, in this one each time we talk with a non-playable character, we are immersed in a cinematic-style view of the conversators, with full voice-acting on all the participants. This absolutely makes you feel like you're inside a Star Wars movie.

First of all you have the story quests, where you character progresses in the storyline, and then you also have the secondary quests that NPCs are gladly to give you at sight. But also, you have bonus quests, those are, quests that appear out from nothing in the middle of a main or secondary quest to give you extra experience on completion. You also have group quests designed to be done in group, heoric quests that require killing elite monsters (and so, almost always, require groups) and flashpoint quests (whatever this means).

You'll soon find yourself imbodied in so many quests you won't get bored at all.

But the most innovative feature introduced by BioWare is, out of doubt, the multiplayer conversation. While you are in a group and in quest, when you talk to the NPC all of the group can decide what to answer. All of them choose their option and dice rolls, the bigger one is the used one.

It's marvellous to see how all your group wants to save the guy and get light points, and you want to kill it, giving dark side points to all your group. And none of you will know who chosen light or dark option until the dice are rolled.

Not only that, the quests storyline is marvellously conceived to maintain you entertained and in the RPG part of the MMORPG word. 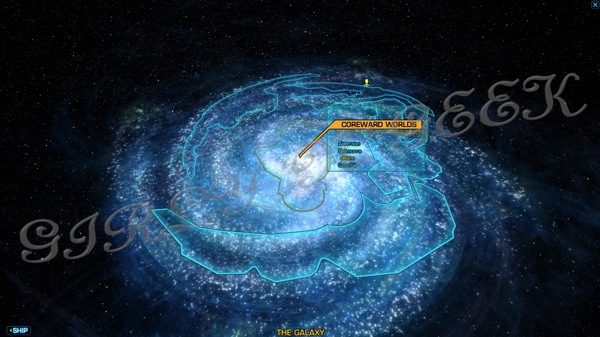 The galaxy is far far away. Ok not so far when you're inside it.

In SWTOR there are a total of 19 playable planets. Some are only accesible for your faction and some only for your root class.

You have also boarding of enemy ships as well as space combat. However I did not have time to test the last one.

Each of them contains a big and immense map, full of quests and heavily detailed.

Approximately on level 16 you get your own ship where you can rest while crafting, engage in space combats, or choose a destination to continue your travel.

However when you are in the farthest place of a planet it can get quite difficult to get to your ship, making movement between planets difficult sometimes. Planets are also instanced, trying that any planet is never underpopulated or overpopulated. 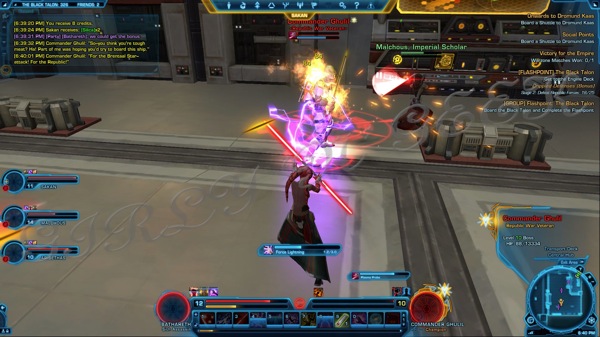 In the PvE section of the game you have the usual experience points system, and a social points system that augments depending on your behaviour in group (including group conversations) as well as a companion system.

The companion system means you can have up to two companions (unluckily it seems you cannot choose). One of them is combat-capable, like some pets on other MMORPGs, and both of them can be sent to "crew skill" missions, like resource gathering and crafting. Or you can send them to sell the useless stuff in your inventory.

Skills are rich in numbers and features, getting easily 24 skills before level 20.

You can also modify armor and weapons with enhancements, or some personalization, like for example making your lightsaber color be red, blue, yellow, so on, put an endurance augmenter, etc. 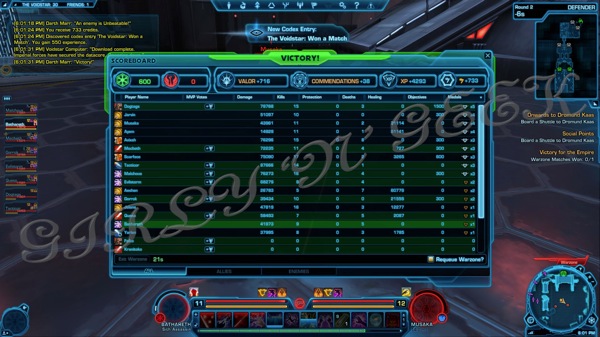 Gaming will be divided in two kind of servers, PvE and PvP. However the PvP features are still incomplete so the rest of this section may get heavy changes.

Also, independently of the server type, you have warzones, that introduce new modes of PvP combat like "capture the flag" ones.

Of course, there is a PvP ranking system as well as PvP oriented gear. 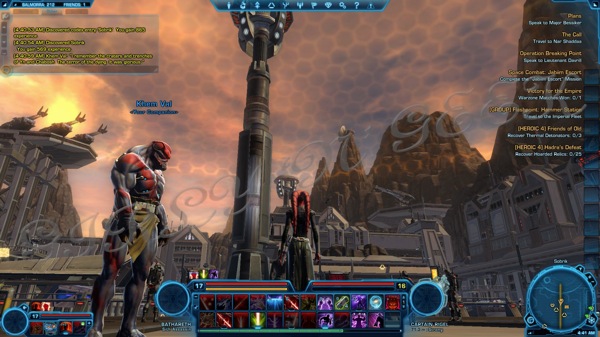 SWTOR is absolutely and marvelously rich in graphics, and lights, but nonetheless, the hardware requirements are not huge.

Tests in my gaming rig with a GeForce GTS250 gave me an almost constant 25 fps rate with medium graphics and at a 1920x1080 pixels resolution.

Each planet contains it's carefully designed vegetation and monsters, with an animated sky that interferes with the lightning of the scene.

The user interface is futuristic, and clear, not intrussive at all. 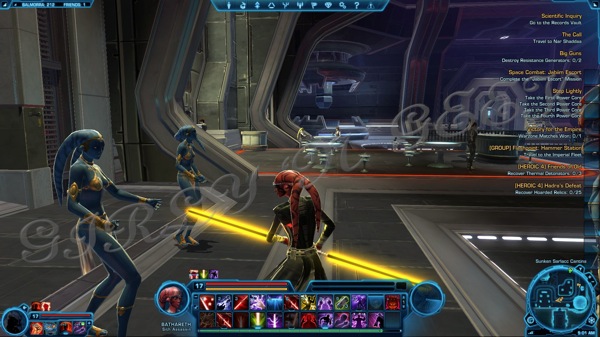 The Standard edition comes with nothing more than the game.

The Collector's edition contains the same of the Digital Deluxe edition, plus the following in-game elements:

along with the following physical items:

all inside a high quality collector's box.

Additionally and independently of the chosen edition, if you pre-order it before release, you'll get a special pre-order crystal in-game, that allows you to change the color of your laser blasts or your lightsaber to black with yellow border (seen in the photo). 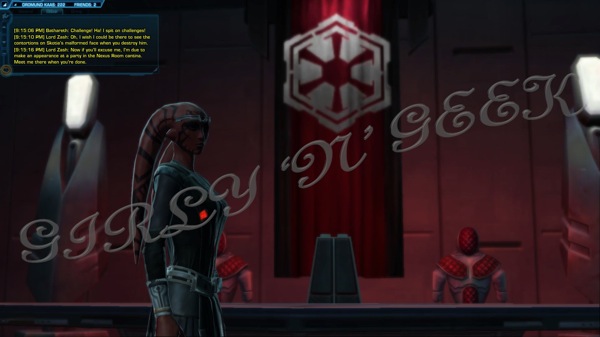 I've enjoyed playing this beta like I've not done in a MMORPG ever.

The storyline, the quests, all together make a marvellous game. and even being a beta, bugs are almost non-existant (compared to other games that are years-old and still bug-filled) and none of them is a stopping bug.

I have preordered it, and if you like MMORPGs for their beauty, their storyline, and/or for Star Wars, you should do the same.

More screenshots are available in my Picasa web album.

Posted by Unknown at 12:07 AM 2 comments: Links to this post